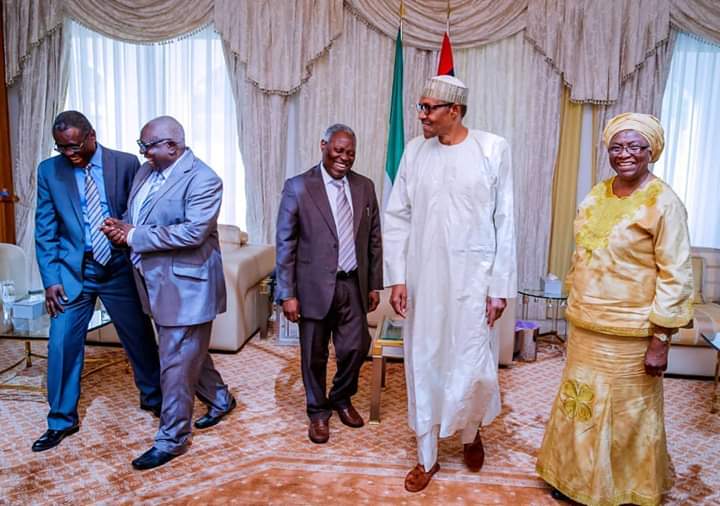 “History teaches us of the danger of being afraid to speak truth to power”- Sadiq Khan, Mayor of London, 2nd June 2019.

Pastor William Kumuyi, who says we should not attack President Muhammadu Buhari, has much to learn from these words. If the world had remained silent in the face of Hitler’s Nazis we would not be here today.
If Moses had remained silent in the face of Pharaoh’s tyranny the Jews would still be slaves in Egypt.
If Elijah and Jehu had remained silent in the face of Jezebel’s tyranny Israel would never have been delivered. If Peter had remained silent in the face of Herod’s tyranny he would never have left prison.
If Samuel had remained silent in the face of Agag and the Amalekites the Jews would have been decimated. If Esther had remained silent in the face of Haman the Jewish race would have been wiped out.
If Hezekiah had remained silent in the face of Sennacherub, Jerusalem would have fallen.
The Bible tells us that we must resist evil, oppose injustice, stand up for the oppressed, liberate the downtrodden, speak for the voiceless, defend the persecuted, defend the faithful and set the captives free. Has Kumuyi forgotten all that?
Does he know the meaning and understand the concept of  liberation theology?
Is he familiar with the great role that the Church played in liberating Southern American countries from military dictatorships in the 20th century, in fighting for the abolition of slavery in the 19th century and in destroying apartheid in South Africa in the 20th century?
Does he know that the primary purpose of any great msn or leader is to liberate his people, oppose tyranny and fight injustice?
Does he know how many great men and women of faith died for these noble causes and stood against these great evils and so many others?
Has he heard of Gideon, Jeptha, David, Daniel, Jehu, Samson, Peter and Paul in the Bible. Did they not oppose evil, speak out against injustice and stand against tyrants in their day?
Every single one of the Lords disciples died for their faith by defying and opposing the tyranny of the rulers of the land. Some were beheaded or fed to beasts whilst others were boiled to death or burnt alive.
In Nigeria today we are facing the greatest, most deadly, most relentlesss and most glaring Fulanisation and Islamisation agenda in the history of our country and it is unfolding before our very eyes.
Hundreds of people are being slaughtered every day and genocide, ethnic cleansing and mass murder is alive and well in our shores.
All this and someone is telling us not to attack the man that is responsible for it by his actions and inactions?
More Nigerians have been slaughtered by Islamist terrorists and ISIS-backed Fulani militias in the last four years in our country than at any orher time in our history other than during the civil war. Yet this man says we must kepo quite and not speak out?
By his  shameful words and his bogus and misleading counsel Kumuyi has spat on the blood and pissed on the graves of every single Christian martyr that ever sacrificed their lives for the faith by opposing tyranny, injustice and evil.
He has also insulted our Lord and Saviour Jesus Christ Himself who opposed the devil, the rulers of this world and the Kingdom of Darknes and died for our sins. He has belittled Jesus’ suffering on the cross and sought to destroy the purpose of his ministry.
If he can say we must not attack Buhari
the next thing he will say is that we must not attack satan and that we must forgive and love the devil.
Shepherds are meant to protect their sheep from ravenous wolves and hungry lions. They are meant to give them hope: they are not meant to sacrifice them to wild beasts and cruel rulers as a weekly blood offering.
It appears that senility and dementia have set in and eroded this once great preacher’s annointing. Worse still cowardice and greed have shattered his his mantle of leadership, decimated his calling and destroyed his credibility. It is time for him to take a break, go home and rest.
I urge everyone to ignore his manifestly irresponsible counsel and to oppose and attack the policies and person of Muhammadu Buhari as much as they deem fit. That is what democracy is all about. Presidents are meant to serve the people and not to be worshipped by them.
May God deliver us from shepherds that slaughter the sheep, that defend the cruel, that support injustice, that love the wicked, that serve the tyrant, that despise the weak, that enslave the poor and that worship genocidal maniacs and sociopathic butchers.
I can only thank God that we still have men of God in this country that are more than ready to speak truth to power and that have proved their worth.
Men like David Oyedepo, T.B. Joshua, Paul Enenche, David Ibiyeomi, Johnson Suleiman, Matthew Hassan Kukah, Tunde Bakare, John Onaiyekan, Paul Adefarasin, Isah El Buba, Samson Ayokunle, Nicholas Okoh, Ayo Oritsejafor, John Praise, Sam Oye, Mike Okonkwo, Sarah Omaku, Daniel Olukoya and so many others.
They are the saving grace of the Church in Nigeria. They are the true servants of the Most High God.
As for those that have chosen to remain silent despite the evil and tyranny in the land and those, like Kumuyi, who have failed in their calling and told us all to keep quiet and not attack Buhari, I say “shame in you!”

ALSO READ:   Uganda slams US over attempted visit to confined opposition leader
Related Topics:
Up Next

‘Go have a pillow talk with your husband’ — Obasanjo tells Aisha

ALSO READ:   'Those Calling Nigeria a Zoo Have a Point' — Fani-Kayode
Continue Reading