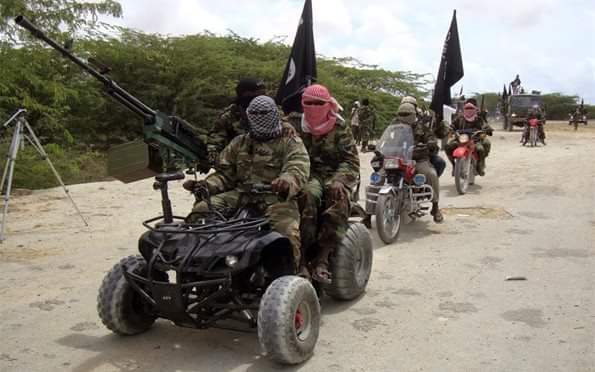 Boko Haram fighters have reportedly overrun Shuwa town in Madagali Local Government Area of Adamawa State, sending the inhabitants on a flight to neighbouring towns.
Sources said that the insurgents have invaded the town using Hilux vans, Tata trucks, and motorcycles.
Eyewitnesses’ accounts claimed that many houses were burnt and the town was now almost empty as thousands of people had fled the area.
Some non-governmental organisations based in Mubi said large numbers of fleeing people of Shuwa were trooping into Mubi.
Residents of Michika town, which is 5km from Shuwa, had seen the fighters running into their town before they returned to Shuwa, their base.
It was not clear if the military responded because the military was said to have been overwhelmed as several Boko Haram invasions took place in the neighbouring communities of Lassa, Shuwa, Uba, and other places which have been under severe attacks from the terrorists in recent time.
When contacted, the Police Public Relations Officer (PPRO), Othman Abubakar, said the police were aware of the Shuwa attack and that the police were on top of the situation, and working hard to bring sanity back to the area.
Othman Abubakar further revealed that the police received information about insurgents’ movement into Shuwa and its neighbouring villages, mostly from the fleeing residents of the town.

‘Armed Group planning to attack Abuja, other states In Nigeria’ — US Intelligence group

Locals said the incident happened in the early hours of Thursday, May 13, 2021, when people were still sleeping.

“They fired sporadically as they stormed the community looking for IPOB members. We saw the bodies in the house this morning,” a resident said, adding that the victims are two women and three men.

Authorities have made no statement regarding the incident, but a traditional chief who confirmed the incident to Gazette Africa said soldiers accused the community of harboring secessionist IPOB members and backing the secessionist group.

“They came around midnight like you said and killed them,” he said.

The Ika Divisional Police Station was attacked and set of fire in the early hours of Wednesday, alongside the Etim Ekpo Police Station, where the attackers killed a policeman, Constable Edogi Bassey, said the State Public Relations Officer — SP Odiko Macdon.

It is the latest attack on police in the state just two weeks after three police officers were killed in separate attacks on police facilities.

No group claimed responsibility for the attack alongside other attacks targeting police formations and other government forces in the country.