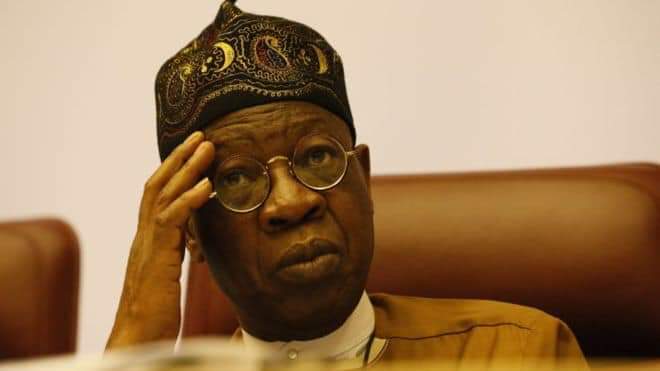 The Peoples Democratic Party (PDP) charges the Minister of Information and Culture, Alhaji Lai Mohammed, to apologize to Nigerians for misleading the nation and heating up the polity with unfounded security breach allegations against the PDP and our Presidential candidate, Atiku Abubakar.
The party says that with the assurances on Monday, that the nation was safe for the Presidential inauguration, Alhaji Mohammed has further exposed the fact that he, acting for the Federal Government, only conjured claims to create the impression that the PDP and Atiku Abubakar had set security breaches against the Presidential inauguration. Allegations that have vanished like what they are – phantoms!
It is indeed lamentable that in its desperation to secure acceptance from Nigerians and confer legitimacy to the outcome of a rigged election, the Buhari administration would manufacture and purvey fake news to the public, only for Nigerians to learn from the same Minister of Information and Culture, that his earlier claims against the PDP and our Presidential candidate were not based on any concrete evidence but, according to him, on having “no reasons to doubt” claims by other individuals.
Moreover, the minister’s claims that he relied on certain alarms fell flat as no agency in the country had ever accused the PDP, as a political party, or our Presidential candidate, Atiku Abubakar, of “doing everything possible to sabotage the Buhari Administration, generally overheat the polity and make Nigeria seemingly ungovernable” as claimed by Lai Mohammed.
It is now clear that the whole essence of the misleading allegation was to heat up the system, attempt to cow democratic voices, divert public discourse from the rigging of the Presidential election and scare the PDP and our Presidential candidate from pursuing our stolen Presidential mandate at the court.
We also have fears that Alhaji Lai Mohammed could have made those wild claims in a bid to pave the way to frame, harass, arrest and detain some opposition figures on trump-up charges.
Such antics have failed as Nigerians have seen through them and are resolute, behind Atiku Abubakar, in the determination to retrieve his mandate in the court, and no form of blackmail and intimidation will detract from that resolve.
By his fabricated claims, the Information Minister only succeeded in further demarketing our dear nation in the international arena, causing more damage to investors’ confidence in our system and exposing this administration as purveyor of fake news.
The PDP therefore invites Alhaji Lai Mohammed to apologize to the nation and desist from such acts of incitement.
Signed:
Kola Ologbondiyan
National Publicity Secretary

ALSO READ:   'Go have a pillow talk with your husband' — Obasanjo tells Aisha
Related Topics:
Up Next

Nigeria: ‘We are sitting on a time bomb’ — Yari

‘Hand Over On May 28’ — Buhari tells ministers

Museveni sworn in for sixth term as Ugandan president

Uganda’s Yoweri Museveni was sworn in Wednesday for his sixth term as president, as police surrounded the home of his main opposition rival who decried the inauguration as a “sham”.

Museveni, who won re-election in January despite widespread reports of irregularities, took the oath of office at a ceremony in Kampala broadcast on national television and attended by several African heads of state and other foreign dignitaries.

The 76-year-old, wearing a dark blue suit and his trademark wide-brimmed safari hat, promised to “pay true allegiance” to the East African country he has ruled nonstop since taking power as a rebel leader in 1986.

His victory in January was overshadowed by the bloodiest pre-election crackdown in years, with opposition candidates forcibly prevented from campaigning and dozens of protesters killed by security forces.

Opposition leader Bobi Wine, who came second to Museveni in the ballot but declared the vote rigged, said police and soldiers had “besieged” his home on the outskirts of Kampala and prevented him from leaving.

“Dictator Museveni is swearing in well aware he stole the elections and disenfranchised Ugandans and he is scared of people opposing the sham ceremony,” the 39-year-old singer-turned-lawmaker told AFP.

“Even if he has sworn in, we will continue the struggle to dislodge him from power through peaceful means and this will come soon.”

Kizza Besigye, an opposition veteran who ran and lost against Museveni in four disputed and often violent presidential elections, was also placed under effective house arrest.

“There was intelligence reports that some people wanted to cause disruptions during the swearing-in ceremony and we took precaution to provide security for some leaders, including the opposition leaders including Bobi Wine and Besigye,” he said.

“This is normal security deployment for VIPs.”

However, Enanga also said Wine was planning to hold a parallel swearing-in ceremony and this would be “illegal and treasonous and police will not allow him to do so.”

ALSO READ:   'Go have a pillow talk with your husband' — Obasanjo tells Aisha

Wine challenged the election result in court but later withdrew his petition, saying the judiciary was stacked in favour of Museveni.

In March he urged Ugandans to “rise up peacefully and unarmed” in protest against Museveni’s ongoing rule. Since the election, the opposition has alleged that security forces have been abducting their supporters.