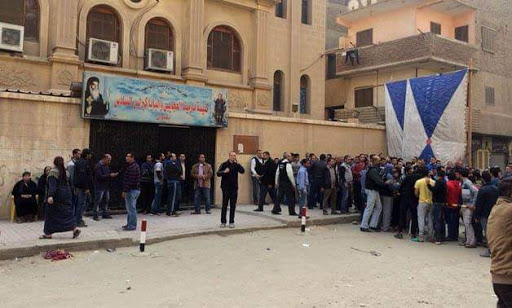 CAIRO (Reuters) – An Egyptian court on Sunday sentenced two men to death and eight others to between three years and life in prison over an attack on a church and Christian-owned shop in Cairo that killed 10 people.

A gunman opened fire in December 2017 on Christians in a shop in the southern Cairo suburb of Helwan, killing two people, before firing on the entrance to the nearby Mar Mina church, where he killed seven Christian worshippers and a policeman.

Two defendants were handed life sentences, four were given four years in prison and two were handed three years in jail. One suspect was acquitted and two others are still at large.

The authorities had said the gunman was wounded by security forces during the attack. Islamic State claimed responsibility.

The main suspect appeared in court on Sunday wearing death row prison clothes, having also been handed two death sentences in military trials after being convicted of attacking military buildings.

The main suspect embraced the other defendants in the court after the verdict.

Under Egypt’s state of emergency law, the defendants can appeal to have the sentence by the security court reduced.

Egypt’s Coptic Christians, who make up about 10% of the population, have been targeted by Islamist militants in recent years.

In November, militants killed seven people when they attacked a bus returning from a baptism at a desert monastery in the governorate of Minya, about 260 km (160 miles) south of Cairo.

70 countries urges North Korea to scrap its nuclear weapons, others

Police in Ivory Coast have rescued 68 children working on cocoa farms, most of whom were trafficked from neighbouring Burkina Faso, authorities said.

The West African country is the world’s top cocoa producer and has close to 1 million children working in the sector despite years of efforts to end child labour.

At a care centre in the southwestern region of Soubre, one of the rescued children told Reuters his father had brought him from Burkina Faso at the age of 13 to work on his uncle’s cocoa plantation and had left him there.

“I’ve been working in cocoa for two years, since I arrived in Ivory Coast,” said the shy Nounfo, who was found by the police splitting open cocoa pods with a machete.

Police said Nounfo’s family links were not clear to the purported uncle who was among about 25 suspected traffickers arrested and now facing up to 10 years in prison.

The issue could weigh on exports to the European Union, which is considering new laws to ban the import of commodities linked to human rights abuses.

The operation involved around 100 police officers last Thursday and Friday and was the first since 2014 in Soubre, at the heart of the cocoa belt.

More action is hampered by a lack of funding, said Luc Zaka, a police commissioner in charge of the special unit on child labour.

“We lack the means to be more efficient and to achieve the expected results, but each time we are in the field we manage to save children and arrest suspects,” he said.

Brahima Coulibaly, a member of the national monitoring committee on child labour, said authorities will conduct operations in another region in a few months.

Seven policemen were killed last week Friday in a new attack by unidentified gunmen who had killed at least 12 government forces in attacks on police formations.

“As a further step towards enhancing our collective safety we have reviewed the existing night time curfew across the 23 Local Government Areas, which will now start from 7 p.m. and end at 6 a.m. until further notice from tomorrow 11th May 2021,” said Wike in a state-wide broadcast on Monday.

The governor also ordered law enforcement agencies to deal decisively with any person or group who violates or attempts to violate the curfew.

Meanwhile, government forces blocked all roads leading to their facilities across the state, causing a traffic jam that left many people stranded and forced to walk a long distance before reaching their places of business and homes.

"The Islamic State is plundering parts of Nigeria now, they manage to impose the Islamic tax of Zakāt at least in some regions at this point"
Post Views: 2

Children are recruited by terrorists under the guise of a humanitarian gesture by distributing them each N500 (five hundred naira), as well as food, shows images posted on Twitter by Pieter Van Ostaeyen, a Belgium reporter, analyst and historian.

“The Islamic State is plundering parts of Nigeria now, they manage to impose the Islamic tax of Zakāt at least in some regions at this point,” Ostaeyan said in Saturday’s report, which confirmed reports that earlier claimed that ISIS had infiltrated Nigeria.

The Islamic State is plundering parts of #Nigeria now.

They manage to impose the Islamic tax of Zakāt at least in some regions at this point 1/ pic.twitter.com/s74BEZO59j

But then again, they redistribute some of it in charity (it seems) pic.twitter.com/WkCArOK9mB

It actually amazes me how many people react in shock. As if this wasn’t happening already.

The United States, alongside others, had said that Islamic State was trying to infiltrate the oil-rich African country already being ravaged by Boko Haram, ISWAP and Fulani herders.