Connect with us
Post Views: 4
By — Juliet Kingsley (GA) 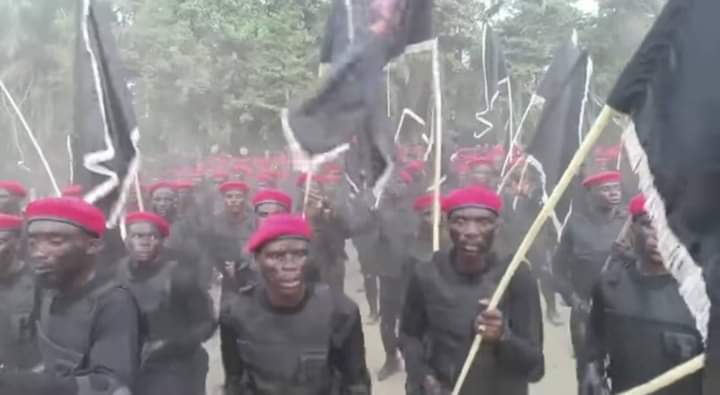 Contrary to speculation that it formed an army to wage war on Nigeria, the separatist group – Indigenous People of Biafra (IPOB) said the security force it created is strictly intended to protect the eastern region from Fulani terrorists popularly known in the country as herders, and criminals.
A statement by the group’s media and publicity secretary, Emma Powerful, said the security force was like other regional security forces in the country.
The separatist group said: “For years, our mothers have not been able to visit their farms for fear of being raped and cut to pieces.
“Delta State Government has inaugurated Operation Delta Hawk. The West were united in their effort to combat Fulani terrorism in their territory, even Miyetti Allah, an open supporter of Fulani herdsmen, had the guts to float a vigilante outfit spread across the nook and cranny of Nigeria with the support of the Presidency and Northern governors.
“But, in our land, the governors in the East cowardly allowed themselves to become fragmented out of fear of displeasing their masters.
“Every ethnic group across Biafraland is well represented in this formation, therefore, I am confident that every city, town and village will be protected from the ravages of Fulani terrorism in whatever guise it manifests itself.
“The ESN is not the Biafran Army and must not be regarded as such. If and when the need to float an army arises, we shall dutifully notify the world.”
ALSO READ:   IPOB's 'sit-at-home' directive records total compliance In Abia, Delta

“The government has even resorted to extrajudicial killings”
Post Views: 4

A Nigerian soldier controls the traffic in Aba, in a pro-Biafra separatist zone. The southeastern Nigerian region has long complained of being marginalized since the end of the civil war in 1970.(Cristina Aldehuela / AFP/Getty Images)
Post Views: 4

ALSO READ:   A morning of horror and the slaughter of a people