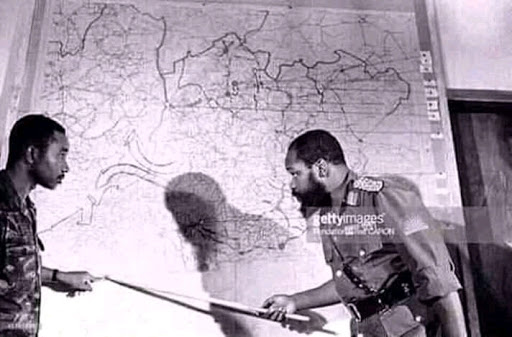 The immediate cause of the civil war may be identified as the coup and the counter coup of 1966 which altered the political equation and destroyed the fragile trust existing among the major ethnic groups.

Before the full-blown war, there was a military coup in 1966 (carried out by Maj. Nzeogwu which led to the death of Tafawa Belewa, among others), a counter-coup (led by Gowon, which led to the brutal murder of Aguiyi Ironsi, Fajuyi, among others) and a persecution of the Igbo people living in Northern Nigeria, forcing them to return home. Even on their way home, many of them were killed in disturbing circumstances.

There have been divided opinions on the 1966 coup as some argue that corruption among the civilian ruling class pushed the military to organize the coup, while others opine that the control of oil production in the Niger Delta was also a major factor.

In May 1967, the Federal Military Government divided the country into twelve states from the original four regions, but the former Eastern Region under Lt. Col. Ojukwu saw the act of the creation of states by decree “without consultation” as the last straw, and declared the Region an independent state of “Biafra”.

Consequently, the Federal Military Government saw this act of secession as illegal. Several meetings were held to resolve the issue peacefully without success. To avoid disintegration of the country, the central government was left with no choice but to forcefully bring back the region to the main fold.

ALSO READ:   Biafra: IPOB declares 'Sit at home' on May 30 to honor those killed

As soon as the war began, the Federal Military Government of Nigeria led by General Yakubu Gowon surrounded the Biafra territory and captured the oil –rich coastal areas.

The blockade imposed during the war led to severe famine such that within the two and half years (30 months) the war lasted, there were over 100,000 overall military casualties, while nearly two million civilians died from starvation, which was a deliberate policy adopted by Nigeria to bring the people on the Biafra side to their knees.

Western powers were also involved in the war, with Britain and the then Soviet Union backing Nigeria, while France and a few other countries supported Biafra.

At the orders of the Federal Military Government, the Nigerian federal troops marched in two divisions into Biafra on the 6th of July, 1976. Division 1, led by Col. Shuwa operated through the north of Biafra, while the second Division advanced on Nsukka which later fell on July 14.

On the 9th of July, the Biafrans led by Lt. Col. Banjo retaliated by marching into the mid-western region of Nigeria across the Niger River, passing through Benin City and later stopped at Ore on August 21.

The Biafran troops captured the mid-west easily because there was little repulsion from soldiers guarding the region. This infuriated Gowon and he asked Col. Muhammad Murtala to form another division (Division 2) to drive the Biafrans out of mid-west and attack Biafra as well.

ALSO READ:   'We'll treat Anyone Associated with IPOB as a terrorist' — Police

The mid-west region was recaptured by the Nigerian army on the 20th of September.

Enugu was made the capital of Biafra, and later when Enugu was captured in October 1967, Aba, Umuahia and Owerri served successively as the provisional capitals.

Within a year, the Federal Military Government captured the city of Port Harcourt and many other coastal oil facilities. The Federal Miltary Government blocked all the routes for transporting food into the Republic of Biafra which led to severe starvation.

The FMG saw this as a war strategy and a way to keep Nigeria united, while many people around the world saw this as nothing but a genocide. The food flown in by foreign mercenary pilots was very little and couldn’t solve the starvation Biafra was facing. Over 2 million Biafrans died of starvation.

By the end of the year 1969, it was obvious that the war will soon come to an end. The FMG launched its final operation known as “Operation Tail-Wind” on January 7, 1970.

The operation was carried out by the 3rd Marine Commando Division and supported by the 1st and 2nd Infantry Division. Owerri was captured on the 9th of January, while Uli fell on the 11th of that same January.

Aware of the hopelessness of the situation, the self- acclaimed Biafra head of state, Lt. Col. Ojukwu fled the Republic immediately with his family on the 10 of January 1970.

The commander of the Biafran army, who was left with the administration of the Republic later surrendered to the Federal Government on the 14 of January, 1970, thus bringing the civil war and bloodshed to an end. The war officially ended on the 15 of January, 1970.

The sudden end of the war in 1970 was a big relief to both sides and the entire world was elated when General Yakubu Gowon said there was no victor, no vanquished. His government also introduced the popular three ‘Rs’, which stood for Reconciliation, Rehabilitation and Reconstruction.

At the end of the civil war, the Federal Military Government ordered that all Biafran currencies must be deposited into a bank account immediately or they would become worthless.

After everyone complied with the directive, they again ordered that every former Biafran account holder will receive only the sum of 20 pounds regardless of how much they had in their account.

This most Biafrans believed was an unjustified act of the civil war as heads of households were forced to rebuild their financial holdings as well as support a typically large African family with only 20 pounds.

“The government has even resorted to extrajudicial killings”
Post Views: 4

ALSO READ:   A morning of horror and the slaughter of a people

ALSO READ:   'We'll treat Anyone Associated with IPOB as a terrorist' — Police

A Nigerian soldier controls the traffic in Aba, in a pro-Biafra separatist zone. The southeastern Nigerian region has long complained of being marginalized since the end of the civil war in 1970.(Cristina Aldehuela / AFP/Getty Images)
Post Views: 4

ALSO READ:   Biafra: IPOB declares 'Sit at home' on May 30 to honor those killed