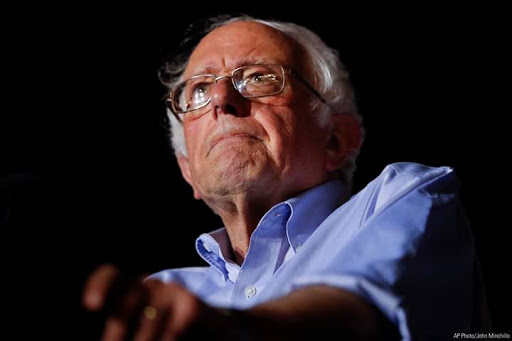 The comments were made in response to a question of how he would maintain the strong relations between the United States and Israel, despite his criticism. The senator claimed that he is not anti-Israeli and noted that some members of his family live in Israel and he even worked on a kibbutz when he was young.

“As a young man I spent a number of months in Israel, worked on a Kibbutz for while, I have family in Israel, I am not anti-Israel but the fact of the matter is that Netanyahu is a right-wing politician who I think is treating the Palestinian people extremely unfairly,” Sanders said.

Sanders defined himself as “one-hundred percent pro Israel” but said that he would approach the Israeli-Palestinian conflict differently than past administrations.

“In other words, the goal is to try to unite people and not just support one country, which is now run by a right-wing, dare I say, racist government,” he added.

Israel has every right in the world to exist and exist in peace and security, and not be subjected to terrorist attacks – but the United States needs to deal with the Palestinian [people] as well and not just Israel.” the US senator said.

“The United States gives billions of dollars a year to Israel in military aid – which believe is not radical,” Sanders said. “I just believe that the United States should deal with the Middle East on a level playing field basis. In other words, the goal must be to try to bring people together and not just support one country, which is now run by a right-wing — dare I say — racist government.”

‘Dissolution of Nigeria Is Inevitable’ — Fani-Kayode

‘Buhari and Some APC Leaders Are Impostors’ — Galadima

US capital locks down as security threats mount

The center of Washington was in lockdown Thursday as more than 20,000 armed National Guard troops were mobilized following the deadly assault on the Capitol and the threat of more violence at the presidential inauguration of Joe Biden.
Police Chief Robert Contee said the US capital was facing “a major security threat” after supporters of outgoing President Donald Trump stormed the Capitol building a week ago in a violent bid to block Biden’s confirmation that left five people dead.
A day after Trump was impeached in Congress for allegedly supporting the assault, more barriers were being erected and razor wire laid as part of precautions ahead of the January 20 ceremony.
Most of downtown Washington was off-limits to traffic, drawing comparisons to Baghdad’s high-security “Green Zone.”
The Secret Service, in charge of security, was weighing an unprecedented shutdown of the entire National Mall, the grassy spread where hundreds of thousands traditionally gather to celebrate the inauguration of a new president.
Security officials are warning that armed extremist Trump supporters, possibly carrying explosives, pose a threat to Washington as well as state capitals over the coming week.
“We are seeing an extensive amount of concerning online chatter,” FBI Director Chris Wray told Vice President Mike Pence in a televised briefing.
“We’re concerned about the potential for violence at multiple protest rallies planned here in DC and state capitol buildings around the country in the days to come, that could bring armed individuals within close proximity to government buildings and officials,” he said.
– ‘Stay alert’ –
In steps not seen since after the September 11, 2001 national alerts, an internal FBI bulletin warned that an armed group planned to “storm” government offices in all 50 states to protest Biden, ABC News reported.
“The FBI received information about an identified armed group intending to travel to Washington, DC on 16 January,” the bulletin added.
The New York Times reported that the FBI has told police departments around the country to stay alert for extremist activity and pass on intelligence.
Political figures boosted their own personal security, as Washington Mayor Muriel Bowser revealed she has received death threats.
Peter Meijer, one of 10 House Republicans who voted with Democrats on Wednesday to impeach Trump for supporting “insurrection,” said he and other lawmakers were taking precautions like acquiring body armor.
“I have colleagues who are now traveling with armed escorts out of the fear for their safety,” he told MSNBC. “Our expectation is that someone may try to kill us.”
The potential threat was underscored earlier this week with the discovery that one of those arrested for taking part in the January 6 attack on the Capitol had the kind of weapons and ammunition one might use for an assassination.
-‘Stay home’-
Court documents said Cleveland Grover Meredith had two guns, one with a telescopic sight, and around 1,000 rounds.
Another man was arrested with four guns and 11 Molotov cocktails in his truck.
Police are still searching for a man who planted two pipe bombs near the Capitol on January 6.
On Tuesday police in Chicago arrested a man who weeks ago phoned in threats against Biden.
Worries were heightened when The Washington Post reported that dozens of people on an FBI terrorist watch list were in Washington for the pro-Trump rallies on January 6.
For the upcoming week Washington officials have urged people to stay home rather than celebrate the inauguration.
Downtown hotels were closing their doors, and Airbnb has canceled reservations in the days around the event.
Airlines were tightening security, with Delta announcing that legally armed travelers formerly allowed to check their guns at security would not even be allowed to do that on flights to Washington.
In several states, National Guard were also called out to prepare security for January 16-20.
Washington State, Michigan and others said they were concerned about possible far-right violence.
AFP

Nnamdi Kanu, leader of the Indigenous People of Biafra – a separatist group in eastern Nigeria, has berated the Nigerian government for failing to designate Miyetti Allah as a terrorist group.

Despite the daily killings by Fulani herders, the Federal Government of Nigeria has ignored appeals from Nigerians seeking the designation of Miyetti Allah Cattle Breeders Association – a group focused on promoting the welfare of Fulani herders, as a terrorist group.
“We are in a country where the Fulani massacre people on a daily basis. They were called terrorists and later insurgents and now they are called bandits. But these are Fulani herders killing people. Nobody has ever designated Miyetti Allah as a terrorist group,” Kanu said while speaking at the ‘2nd Never Again Conference: 51 Years After Nigerian-Biafra Civil War’ organised by an Igbo think-tank, Nzuko Umunna, and monitored the Nigerian PUNCH Newspaper.
The leader of the separatist group, whose group has been designated as a terrorist group by the Nigerian government led by President Muhammadu Buhari but not accepted by the international community, further claimed that Nigeria’s oft-called unity is a deception.

A Nigerian bishop of the Catholic diocese of Sokoto, Matthew Hassan Kukah, faces assassination as another Islamic group threatens him.

Bishop Kukah had received threats from Muslim groups and officials in Nigeria after a homily in which he criticized the administration of President Muhammadu Buhari whom he accused of nepotism, and also referred to the worsening insecurity in the country.
The Muslim Solidarity Forum asked the cleric to apologize for what they called “malicious vituperations against Islam and Muslims” and to vacate Sokoto immediately.
The group claims that Bishop Kukah systematically attacks Muhammadu Buhari, who is a Muslim, and other Muslims at all times.
“In February 2020, he (Kukah) shamelessly staged a demonstration in the heart of Sokoto over the killing of a single Christian priest, presumably, by the Boko Haram insurgents, but did not consider hundreds of Muslims, Fulani herders that were mercilessly killed by the Christian militia in Taraba state in 2018,” the Islamic group said in a statement by its acting chairman, Professor Isa Maishanu.
Meanwhile, well-meaning Nigerians and activists have condemned attacks by Muslim groups on Kukah, describing the order asking him to leave Sokoto as a serious threat that could lead to his assassination.
The Nigerian government has yet to release any statement regarding the new threat.