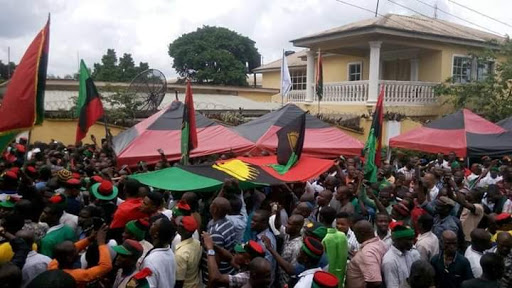 The Indigenous people of Biafra, IPOB, have warned against any attempt by any person or group to discourage people from observing the ordered Sit-At-Home across the old eastern region of Nigeria on May 30, 2019.

IPOB had previously declared “sit at home”, to commemorate those who died in the struggle for Biafra.

In a statement received by VIEW REPORT, IPOB lashed out against individuals and groups who are against the order, adding that it will be disastrous for them.

“To shamefully make such open and unguarded statements concerning the remembrance day celebration of our fallen heroes and heroines who died that we may live is indicative of the hopelessness and criminal mindset of these Nigeria sponsored criminals masquerading as Biafrans.”

“There will be a complete lockdown of Biafraland and major cities where Biafrans have a significant population concentration like Sabon Gari in Kano, Lagos, Kaduna, Zaria and Abuja.”

“Any attempt to discourage our people from honouring their heroes or bring ridicule to the memory of our own Biafran activists that died in the course of Biafra restoration will be calamitous for the said traitor or his group.”

“Only informants, traitors and sabotuers will dream stepping outside on the 30th of May and if they do, they will only have themselves to blame,” the group said.

“The government has even resorted to extrajudicial killings”
Post Views: 6

A Nigerian soldier controls the traffic in Aba, in a pro-Biafra separatist zone. The southeastern Nigerian region has long complained of being marginalized since the end of the civil war in 1970.(Cristina Aldehuela / AFP/Getty Images)
Post Views: 6