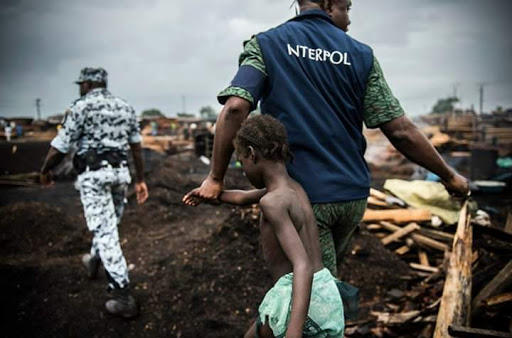 Police have rescued 216 human trafficking victims, mainly children, from forced labour and prostitution in a major operation in Benin and Nigeria, Interpol said on Wednesday.

Many of the children were working in markets peddling goods, carrying heavy loads or fetching water, while others worked as housemaids or were forced into prostitution, Interpol said. Of the minors rescued, 36 were boys and 121 were girls.

Investigations are underway to dismantle the crime networks active in Benin and Nigeria, which are source, transit and destination countries for human trafficking, said Paul Stanfield, Interpol’s director of organised and emerging crime.

ALSO READ:   Monarch Says Yorubas Are The Roots Of Nigeria's Crisis Since Independence

“This is about organised crime groups who are motivated by money,” Stanfield told the Thomson Reuters Foundation.

“It is challenging (to stop them) in the region because of lack of resources,” he said, adding that countries are nonetheless becoming better equipped and more prepared.

Police arrested 47 suspected traffickers and seized vehicles, cash, phones and computers in the operation, which targeted markets in the countries’ capitals as well as airports, seaports and border areas, said Interpol.

The children rescued were between the ages of 11 and 16 and came from Benin, Burkina Faso, Niger, Nigeria and Togo.

The youngest was a boy forced to smuggle heavy goods such as bags of rice across the Benin-Nigeria border, Interpol said.

Most were subject to beatings and abuse, including death threats and warnings they would never see their parents again. They are now in the care of national agencies or charities, and in some cases returned to their parents.

About 1.4 million people, or 0.8 percent of the population, are estimated to live as slaves in Nigeria, according to the 2018 Global Slavery Index published by human rights group Walk Free Foundation. Benin has an estimated 58,000 slaves out of a population of 11 million.

“These crimes can only be tackled collectively and through interagency cooperation,” said Dominic Asogwa, Comptroller of Nigeria’s Immigration Service in the Seme border region, in a statement.

Interpol will continue working to identify hot spots for modern slavery in West Africa with a focus on mobilizing countries to address the issue themselves, Stanfield said.

“I think we’ll be here for the long-term, but we don’t want to be in charge of leading it,” he said.

ALSO READ:   Nigeria: 'A Truly United Nation Does Not Require Bloodshed To Keep It One'

PHOTO: Protesters with the flag of "Ambazonia"
Post Views: 4

ALSO READ:   Nigeria: 'A Truly United Nation Does Not Require Bloodshed To Keep It One'